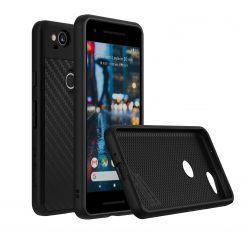 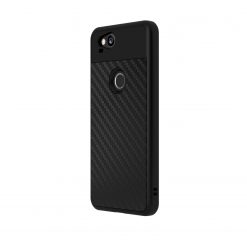 The slim protective case that gives you
maximum protection with a premium finish.

The SolidSuit Classic ups the ante in the category of minimal cases. The understated matte finish exudes elegance while providing improved scratch resistance.

Marvel at the beauty of carbon fiber without any signal interference. The matte surface resists abrasion while allowing for a good grip.

Go luxe with our top-tier leather case. We use only high-quality genuine leather so you can get that premium feel without sacrificing protection.

A hexagonal pattern lines the inner surfaces of our case, improving shock absorption by up to 10%

A hexagonal pattern lines the inner surfaces of our case, improving shock absorption by up to 10%

Our ShockSpread™ material is super tough, making it incredibly difficult to break. This is because the material is able to resist larger forces. This same property means the case provides a tight fit, preventing your phone from falling out during impact.

However, for a strong material, ShockSpread™ is surprisingly flexible. This means that the case bends slightly for easier installation, without permanent loosening. 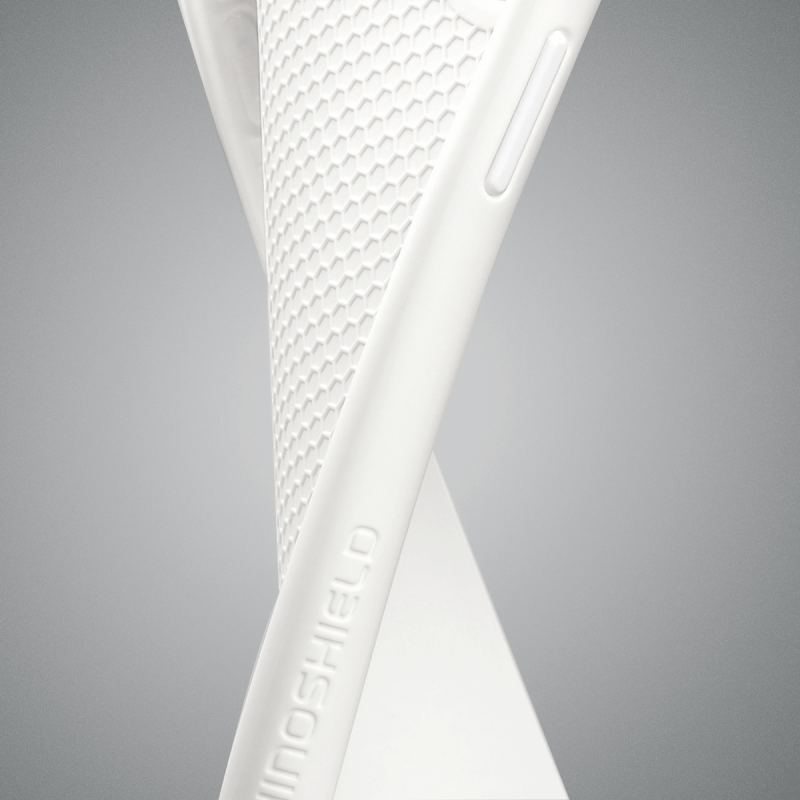 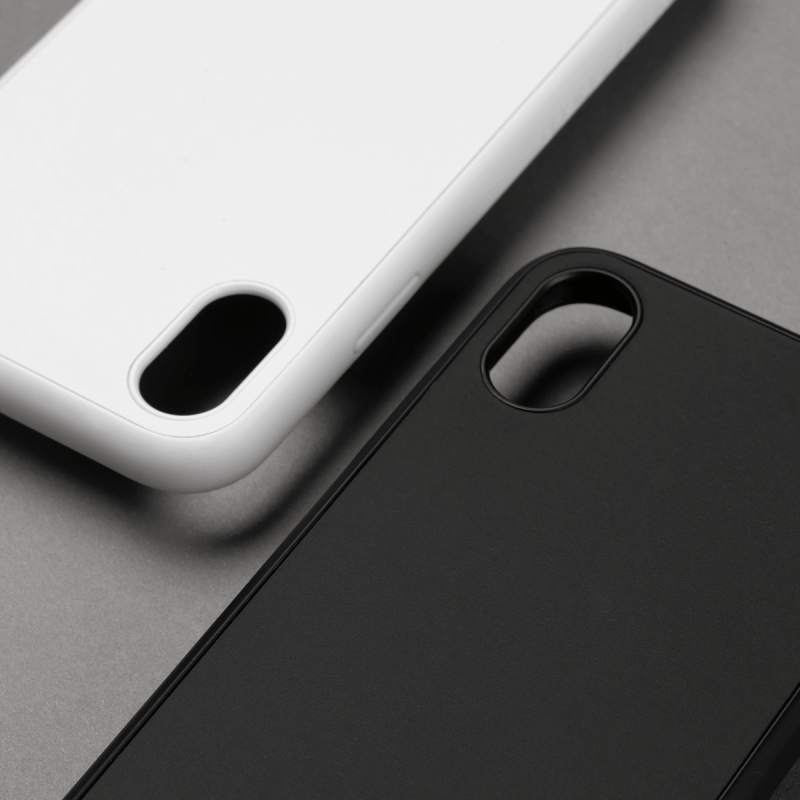 RhinoShield cases are among the thinnest and lightest protective cases you can find. ShockSpread™ reduces overall volume by 40% and overall thickness by 22%. Our cases weigh an average of 30g – equivalent to a AA battery – or half that if using a bumper.

We have formulated the new material with your health and safety in mind. Our latest cases have been independently tested and meet the US FDA food-grade standards.

They also contain no BPA, BPS or BPF – chemicals commonly used in plastics which have been linked to possible developmental issues in young children, as well as reproductive toxicity. 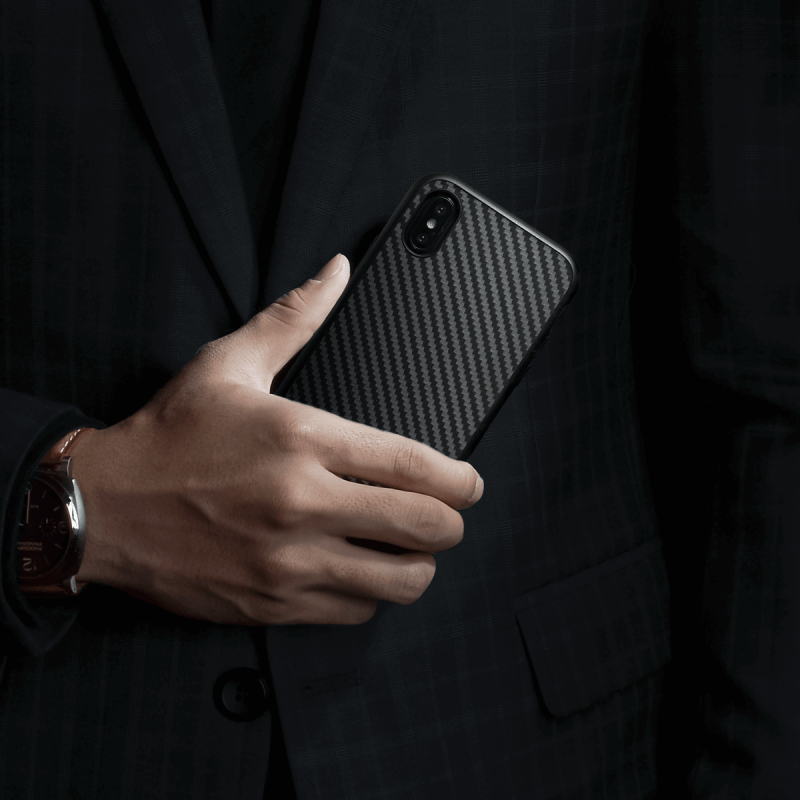 RhinoShield is a device accessories brand with evolution at its heart. It combines materials engineering and product design to create useful, inimitable products. Born out of a materials science lab in Cambridge, RhinoShield gained prominence in 2013 with a jaw-dropping, hammer-tested screen protector. Its next release – the CrashGuard case – became the highest-backed iPhone case project on Kickstarter at the time, and is still the benchmark for bumper cases. 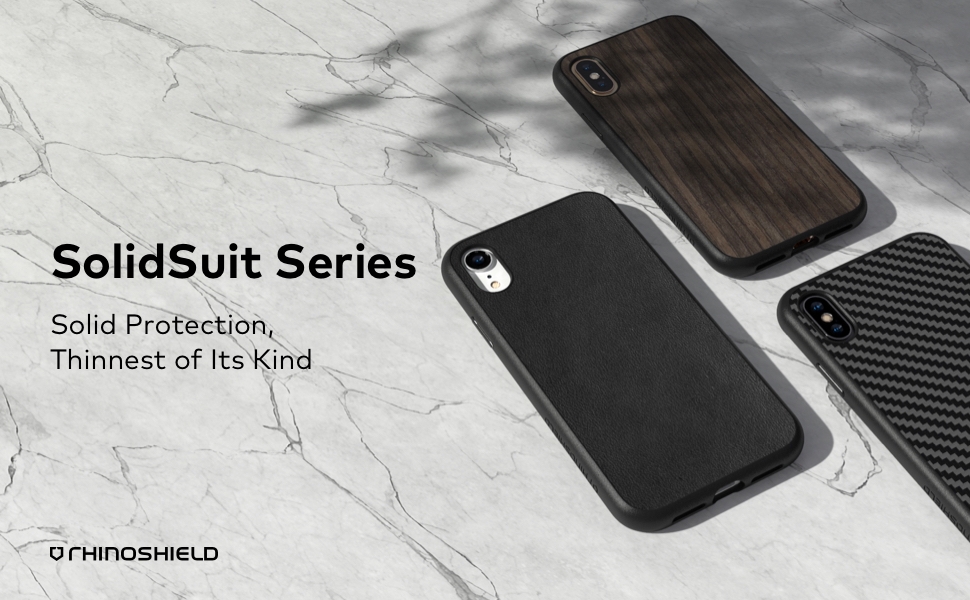 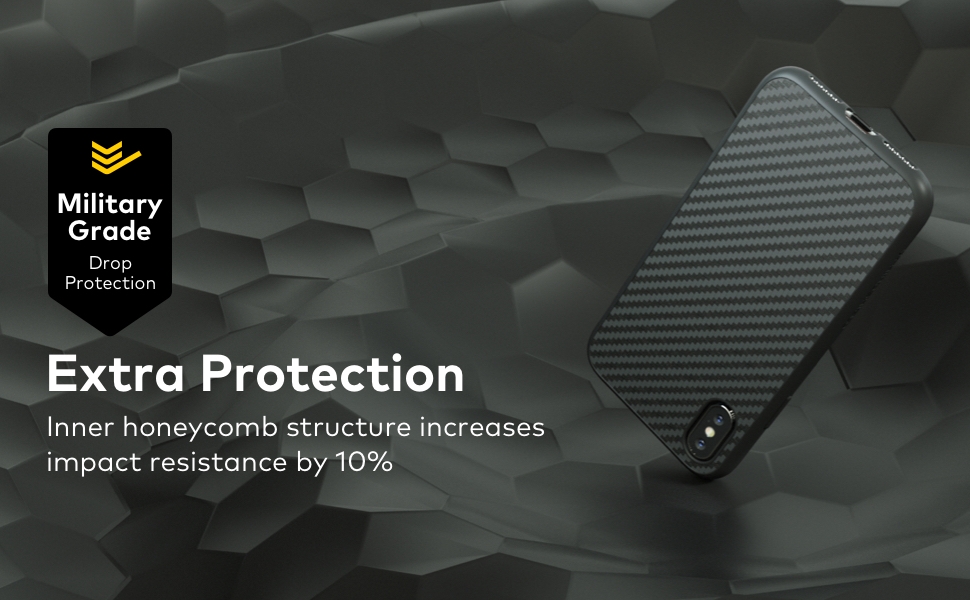 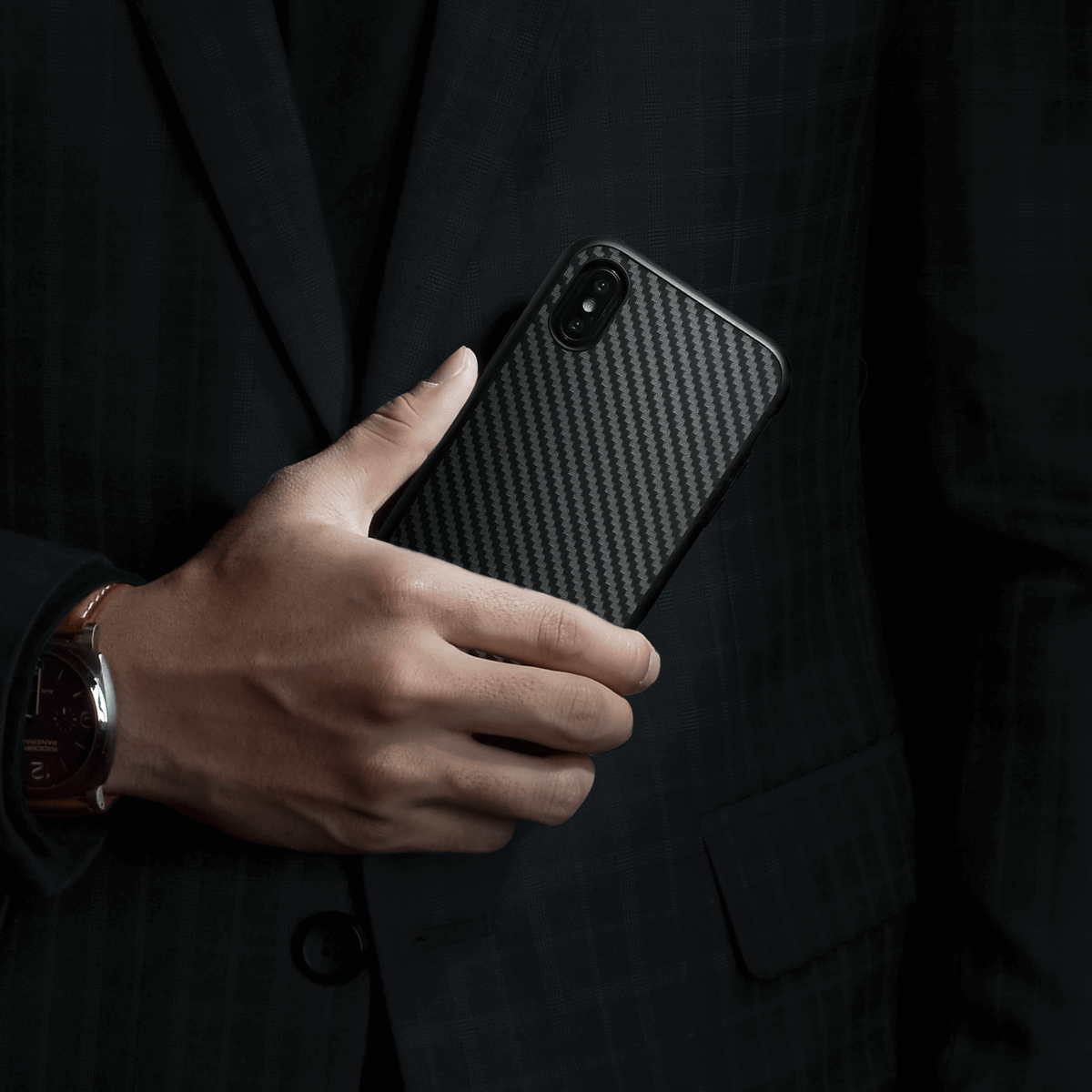 A revved-up take on the traditional phone case. Precisely molded into a one-piece shell and features a premium finish on the back. 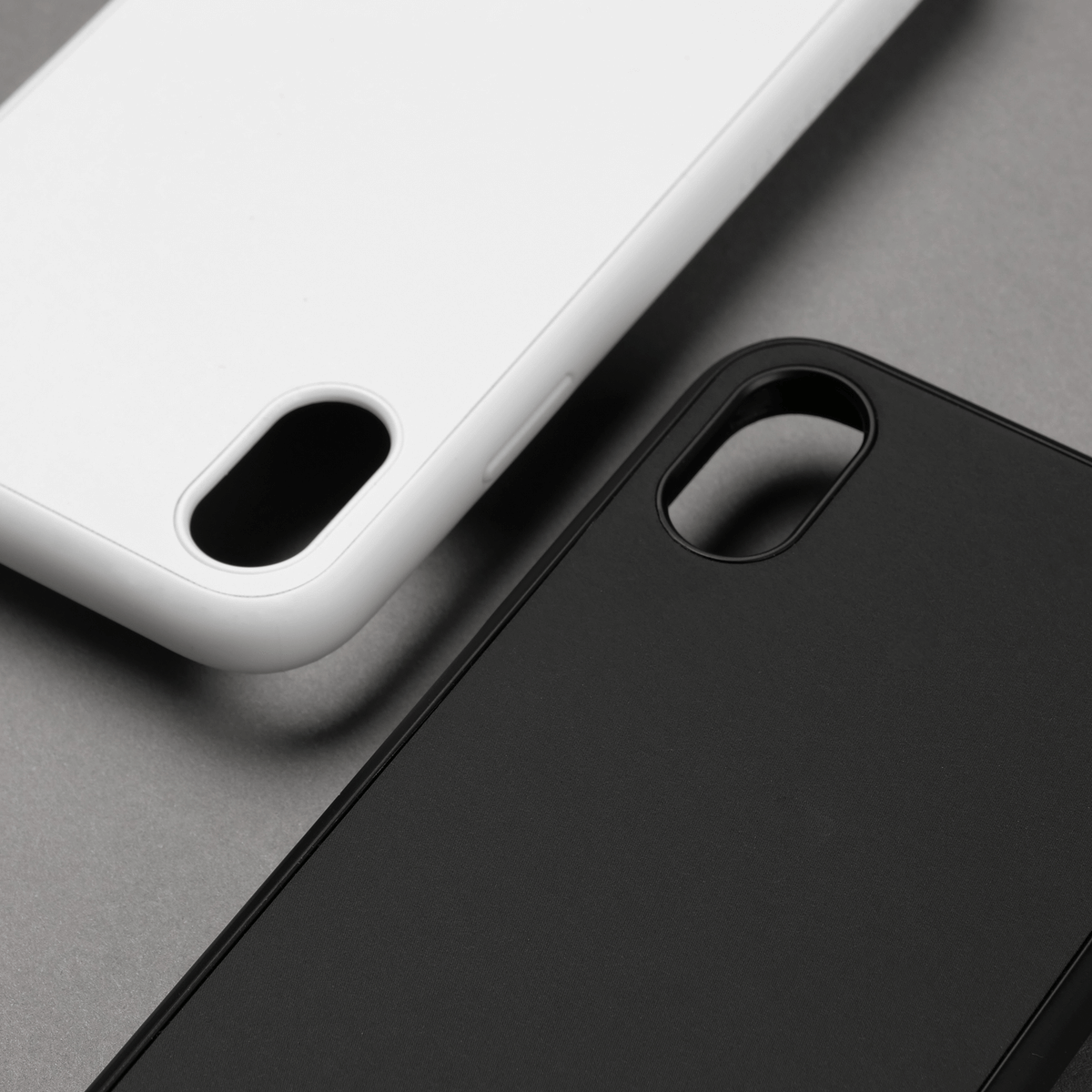 The new ShockSpread technology reduces overall volume by 40% and thickness by 22%. 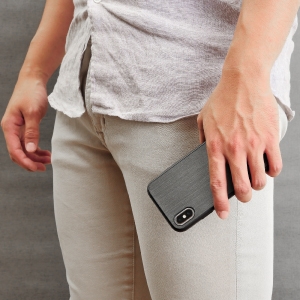 One of the thinnest and lightest protective cases you can find. Our cases weigh an average of 30g – equivalent to a AA battery.

Dab Lew Tech carefully selected a premium range of RhinoShield Cases which will protect your phones from drop damage, whilst a minimalistic design will surely flaunt the beautiful lines of your mobile phone's body. Not only that but it also exceeds military standards and can absorb impact of over 11 feet. Dab Lew Tech stocks RhinoShield products for all the flagship devices, such as Samsung Note 10, Samsung Galaxy S20, iPhone x, iPhone 11, Oneplus 8 and many more. Dab Lew Tech equips the widest range of Original RhinoSheild Products in Pakistan. Our Rhinoshield product range at www.dablew.pk includes all the best sellers from Amazon.com so that you can get original international standard products here in Pakistan.

So hard to remove, feel like I will break my phone.

Trust me when I say, I've tried a lot of cases on the Pixel 2!I can't say it's the most beautiful case, being quite simple and black, though I definitely enjoy the look and texture of the carbon fibre style section on the back.The case has only a little flexibility in it before it goes on, so is a little harder to put on and take off. That being said, I never felt I was going to break my phone taking it off. My advice would be to flip the case over and start by pulling if each bottom corner.For the level of protection this case is supposed to give (which I can't confirm as I've not dropped it yet!) It's much thinner than some rivals, like he tech21 Evo Check. The case is also very light, adding hardly any extra weight to the phone, unlike other heavy duty TPU and polycarbonate cases. This is in part due to the special plastic the case is made from.Buttons are nice and clicky, though I did have a problem with the volume up button when I first got through case, it seemed to be permanently stuck down. After pressing it for about a minute it loosened off and has worked fine ever since.There is plenty of protection for the camera on the back, and the fingerprint scanner is nice and easy to find, with a slight raised lip around it. They're is also a decent lip around the display, again lightly more than the rival tech21 case.The bottom of the case, where my little finger always rests is also nice and smooth and doesn't stuff into me like some other cases.The charger cutout is also a good size, along with cutouts for the two microphones.My two negatives are when your hands are quite dry, the sides of the phone can be a bit slippy. The other small downside is that you can swap the power button is changeable to a whole range of colours, however these are not available on Amazon UK. Despite being designed in Cambridge, shipping a pack of these other coloured buttons to the UK from the official Rhinoshield website costs twice the price of the item! That being said, it's quite a minor gripe of a case nerd like me.I'm pretty sure you can also buy an attachment separately directly from Rhinoshield that lets you use this case with their range of camera lenses, adding more versatility to the case.In summary, it's a great lightweight case that should provide plenty of protection for your phone, and is genuinely different from all the TPU cases out there, but can be a little slippy, but in my opinion is worth it.You'll have to forgive the photos, the ones with the case on the phone are taken on my old OnePlus One!

it almost hurts to get this case off the phone, it's almost like if the case is just made of hard plastic (but it's not)at this price i could get a much better case (though rhino is a good case maker)

First time using a RhinoShield full protect case. I had the bumper cases in the past and hated them. Phone is well protective. I wish the volume buttons were "clicky" as the power button. Case is plain slippery. I just miss my speck case. I should have purchased another.

Did not fit Pixel 2

Case material feels good however the case fits way too snug. Causing volume buttons to constantly be pressed...Update: Took the back end of a spoon and applied pressure to both sides of the volume button. Case now fits ok.

I've been a fan of rhinoshield since I bought the bumper case for my Nexus 6p. It has protected my phone from numerous falls at work, on the road etc. No scratches on the phone. As a satisfied user, I had to buy this for my wife's pixel 2. It looks beautiful, non-slippery to touch and a great protection for the phone with no exposed back. Fits perfectly on the phone and keeps secure. Although it's a bit difficult to remove the cover off once installed. The case maybe bendable but not stretchy, hence I recommend to install the case and forget. Again, this is the best investment to protect your phone.

All RhinoShield cases provide at least 11 feet of drop protection (which surpasses the US military drop test standard), thanks to our proprietary ShockSpread™ technology. Our hammer-tested Impact Protection Screen Protector is also able to take at least 5 times the impact energy of Gorilla Glass 3. Watch how our case and protector work hand in hand to protect your phone through the drop tests below! 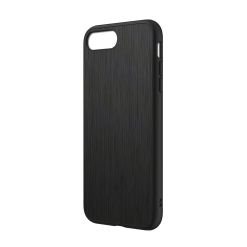 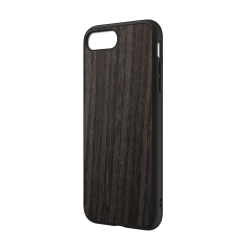 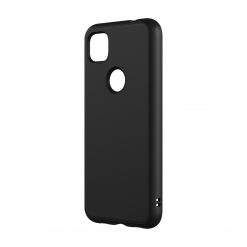 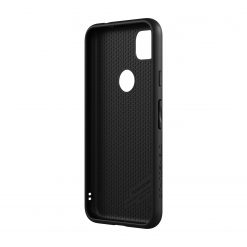 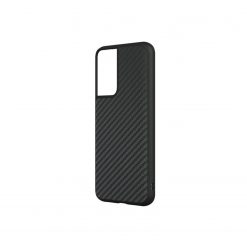 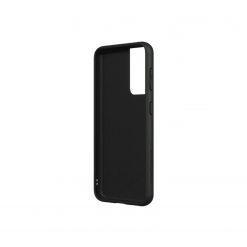 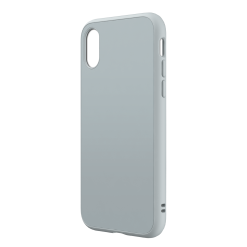 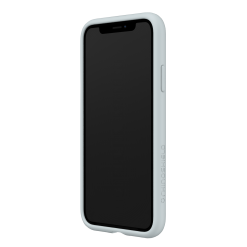 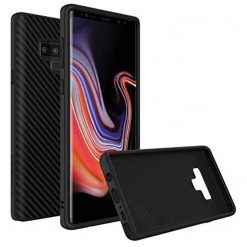 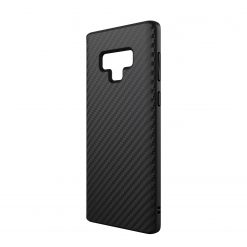 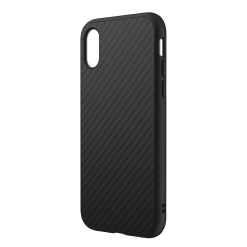 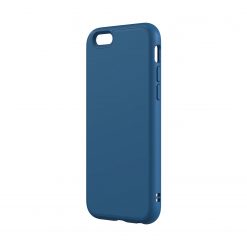 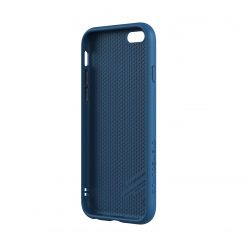